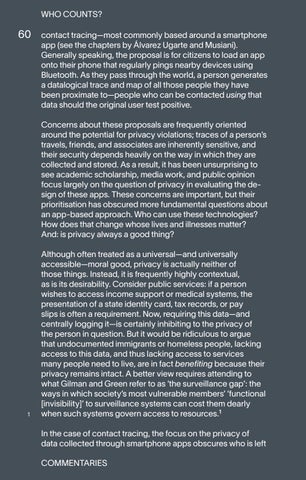 contact tracing—most commonly based around a smartphone app (see the chapters by Álvarez Ugarte and Musiani). Generally speaking, the proposal is for citizens to load an app onto their phone that regularly pings nearby devices using Bluetooth. As they pass through the world, a person generates a datalogical trace and map of all those people they have been proximate to—people who can be contacted using that data should the original user test positive. Concerns about these proposals are frequently oriented around the potential for privacy violations; traces of a person’s travels, friends, and associates are inherently sensitive, and their security depends heavily on the way in which they are collected and stored. As a result, it has been unsurprising to see academic scholarship, media work, and public opinion focus largely on the question of privacy in evaluating the design of these apps. These concerns are important, but their prioritisation has obscured more fundamental questions about an app-based approach. Who can use these technologies? How does that change whose lives and illnesses matter? And: is privacy always a good thing?

Although often treated as a universal—and universally accessible—moral good, privacy is actually neither of those things. Instead, it is frequently highly contextual, as is its desirability. Consider public services: if a person wishes to access income support or medical systems, the presentation of a state identity card, tax records, or pay slips is often a requirement. Now, requiring this data—and centrally logging it—is certainly inhibiting to the privacy of the person in question. But it would be ridiculous to argue that undocumented immigrants or homeless people, lacking access to this data, and thus lacking access to services many people need to live, are in fact benefiting because their privacy remains intact. A better view requires attending to what Gilman and Green refer to as ‘the surveillance gap’: the ways in which society’s most vulnerable members’ ‘functional [invisibility]’ to surveillance systems can cost them dearly when such systems govern access to resources.1 In the case of contact tracing, the focus on the privacy of data collected through smartphone apps obscures who is left COMMENTARIES