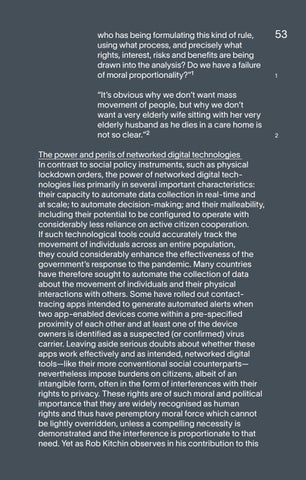 who has being formulating this kind of rule, using what process, and precisely what rights, interest, risks and benefits are being drawn into the analysis? Do we have a failure of moral proportionality?”1 “It’s obvious why we don’t want mass movement of people, but why we don’t want a very elderly wife sitting with her very elderly husband as he dies in a care home is not so clear.”2 The power and perils of networked digital technologies In contrast to social policy instruments, such as physical lockdown orders, the power of networked digital technologies lies primarily in several important characteristics: their capacity to automate data collection in real-time and at scale; to automate decision-making; and their malleability, including their potential to be configured to operate with considerably less reliance on active citizen cooperation. If such technological tools could accurately track the movement of individuals across an entire population, they could considerably enhance the effectiveness of the government’s response to the pandemic. Many countries have therefore sought to automate the collection of data about the movement of individuals and their physical interactions with others. Some have rolled out contacttracing apps intended to generate automated alerts when two app-enabled devices come within a pre-specified proximity of each other and at least one of the device owners is identified as a suspected (or confirmed) virus carrier. Leaving aside serious doubts about whether these apps work effectively and as intended, networked digital tools—like their more conventional social counterparts— nevertheless impose burdens on citizens, albeit of an intangible form, often in the form of interferences with their rights to privacy. These rights are of such moral and political importance that they are widely recognised as human rights and thus have peremptory moral force which cannot be lightly overridden, unless a compelling necessity is demonstrated and the interference is proportionate to that need. Yet as Rob Kitchin observes in his contribution to this