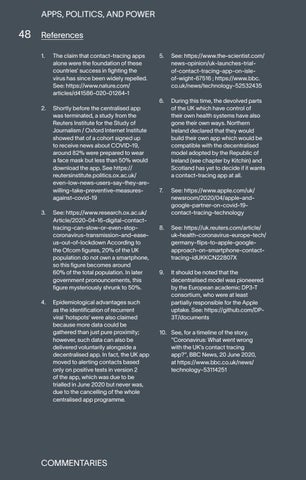 The claim that contact-tracing apps alone were the foundation of these countries’ success in fighting the virus has since been widely repelled. See: https://www.nature.com/ articles/d41586-020-01264-1

2. Shortly before the centralised app was terminated, a study from the Reuters Institute for the Study of Journalism / Oxford Internet Institute showed that of a cohort signed up to receive news about COVID-19, around 82% were prepared to wear a face mask but less than 50% would download the app. See https:// reutersinstitute.politics.ox.ac.uk/ even-low-news-users-say-they-arewilling-take-preventive-measuresagainst-covid-19 3.

See: https://www.research.ox.ac.uk/ Article/2020-04-16-digital-contacttracing-can-slow-or-even-stopcoronavirus-transmission-and-easeus-out-of-lockdown According to the Ofcom figures, 20% of the UK population do not own a smartphone, so this figure becomes around 60% of the total population. In later government pronouncements, this figure mysteriously shrunk to 50%.

4. Epidemiological advantages such as the identification of recurrent viral ‘hotspots’ were also claimed because more data could be gathered than just pure proximity; however, such data can also be delivered voluntarily alongside a decentralised app. In fact, the UK app moved to alerting contacts based only on positive tests in version 2 of the app, which was due to be trialled in June 2020 but never was, due to the cancelling of the whole centralised app programme.

6. During this time, the devolved parts of the UK which have control of their own health systems have also gone their own ways. Northern Ireland declared that they would build their own app which would be compatible with the decentralised model adopted by the Republic of Ireland (see chapter by Kitchin) and Scotland has yet to decide if it wants a contact-tracing app at all. 7.

8. See: https://uk.reuters.com/article/ uk-health-coronavirus-europe-tech/ germany-flips-to-apple-googleapproach-on-smartphone-contacttracing-idUKKCN22807X 9. It should be noted that the decentralised model was pioneered by the European academic DP3-T consortium, who were at least partially responsible for the Apple uptake. See: https://github.com/DP3T/documents 10. See, for a timeline of the story, “Coronavirus: What went wrong with the UK’s contact tracing app?”, BBC News, 20 June 2020, at https://www.bbc.co.uk/news/ technology-53114251