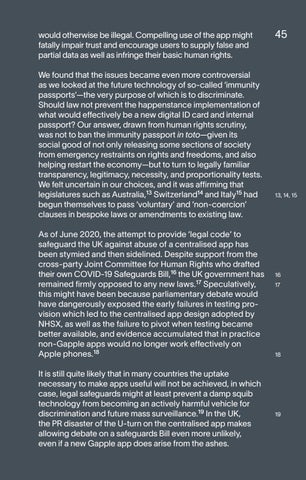 would otherwise be illegal. Compelling use of the app might fatally impair trust and encourage users to supply false and partial data as well as infringe their basic human rights. We found that the issues became even more controversial as we looked at the future technology of so-called ‘immunity passports’—the very purpose of which is to discriminate. Should law not prevent the happenstance implementation of what would effectively be a new digital ID card and internal passport? Our answer, drawn from human rights scrutiny, was not to ban the immunity passport in toto—given its social good of not only releasing some sections of society from emergency restraints on rights and freedoms, and also helping restart the economy—but to turn to legally familiar transparency, legitimacy, necessity, and proportionality tests. We felt uncertain in our choices, and it was affirming that legislatures such as Australia,13 Switzerland14 and Italy15 had begun themselves to pass ‘voluntary’ and ‘non-coercion’ clauses in bespoke laws or amendments to existing law. As of June 2020, the attempt to provide ‘legal code’ to safeguard the UK against abuse of a centralised app has been stymied and then sidelined. Despite support from the cross-party Joint Committee for Human Rights who drafted their own COVID-19 Safeguards Bill,16 the UK government has remained firmly opposed to any new laws.17 Speculatively, this might have been because parliamentary debate would have dangerously exposed the early failures in testing provision which led to the centralised app design adopted by NHSX, as well as the failure to pivot when testing became better available, and evidence accumulated that in practice non-Gapple apps would no longer work effectively on Apple phones.18 It is still quite likely that in many countries the uptake necessary to make apps useful will not be achieved, in which case, legal safeguards might at least prevent a damp squib technology from becoming an actively harmful vehicle for discrimination and future mass surveillance.19 In the UK, the PR disaster of the U-turn on the centralised app makes allowing debate on a safeguards Bill even more unlikely, even if a new Gapple app does arise from the ashes.