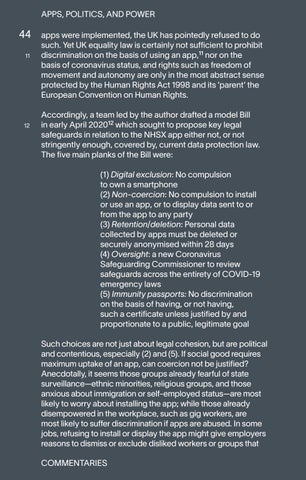 apps were implemented, the UK has pointedly refused to do such. Yet UK equality law is certainly not sufficient to prohibit discrimination on the basis of using an app,11 nor on the basis of coronavirus status, and rights such as freedom of movement and autonomy are only in the most abstract sense protected by the Human Rights Act 1998 and its ‘parent’ the European Convention on Human Rights. Accordingly, a team led by the author drafted a model Bill in early April 202012 which sought to propose key legal safeguards in relation to the NHSX app either not, or not stringently enough, covered by, current data protection law. The five main planks of the Bill were: (1) Digital exclusion: No compulsion to own a smartphone (2) Non-coercion: No compulsion to install or use an app, or to display data sent to or from the app to any party (3) Retention/deletion: Personal data collected by apps must be deleted or securely anonymised within 28 days (4) Oversight: a new Coronavirus Safeguarding Commissioner to review safeguards across the entirety of COVID-19 emergency laws (5) Immunity passports: No discrimination on the basis of having, or not having, such a certificate unless justified by and proportionate to a public, legitimate goal Such choices are not just about legal cohesion, but are political and contentious, especially (2) and (5). If social good requires maximum uptake of an app, can coercion not be justified? Anecdotally, it seems those groups already fearful of state surveillance—ethnic minorities, religious groups, and those anxious about immigration or self-employed status—are most likely to worry about installing the app; while those already disempowered in the workplace, such as gig workers, are most likely to suffer discrimination if apps are abused. In some jobs, refusing to install or display the app might give employers reasons to dismiss or exclude disliked workers or groups that COMMENTARIES