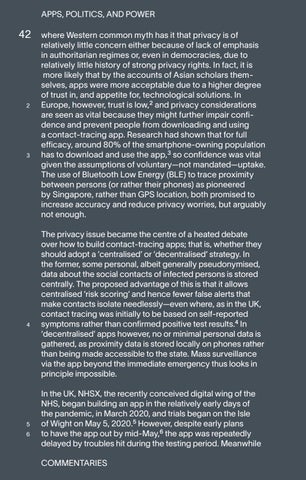 where Western common myth has it that privacy is of relatively little concern either because of lack of emphasis in authoritarian regimes or, even in democracies, due to relatively little history of strong privacy rights. In fact, it is more likely that by the accounts of Asian scholars themselves, apps were more acceptable due to a higher degree of trust in, and appetite for, technological solutions. In Europe, however, trust is low,2 and privacy considerations are seen as vital because they might further impair confidence and prevent people from downloading and using a contact-tracing app. Research had shown that for full efficacy, around 80% of the smartphone-owning population has to download and use the app,3 so confidence was vital given the assumptions of voluntary—not mandated—uptake. The use of Bluetooth Low Energy (BLE) to trace proximity between persons (or rather their phones) as pioneered by Singapore, rather than GPS location, both promised to increase accuracy and reduce privacy worries, but arguably not enough. The privacy issue became the centre of a heated debate over how to build contact-tracing apps; that is, whether they should adopt a ‘centralised’ or ‘decentralised’ strategy. In the former, some personal, albeit generally pseudonymised, data about the social contacts of infected persons is stored centrally. The proposed advantage of this is that it allows centralised ‘risk scoring’ and hence fewer false alerts that make contacts isolate needlessly—even where, as in the UK, contact tracing was initially to be based on self-reported symptoms rather than confirmed positive test results.4 In ‘decentralised’ apps however, no or minimal personal data is gathered, as proximity data is stored locally on phones rather than being made accessible to the state. Mass surveillance via the app beyond the immediate emergency thus looks in principle impossible. In the UK, NHSX, the recently conceived digital wing of the NHS, began building an app in the relatively early days of the pandemic, in March 2020, and trials began on the Isle of Wight on May 5, 2020.5 However, despite early plans to have the app out by mid-May,6 the app was repeatedly delayed by troubles hit during the testing period. Meanwhile COMMENTARIES