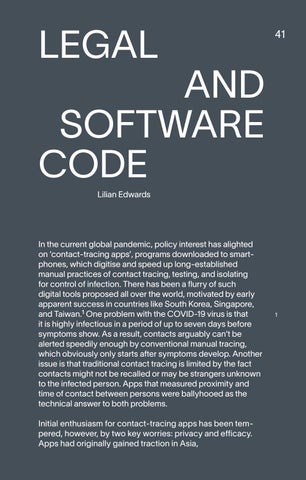 In the current global pandemic, policy interest has alighted on ‘contact-tracing apps’, programs downloaded to smartphones, which digitise and speed up long-established manual practices of contact tracing, testing, and isolating for control of infection. There has been a flurry of such digital tools proposed all over the world, motivated by early apparent success in countries like South Korea, Singapore, and Taiwan.1 One problem with the COVID-19 virus is that it is highly infectious in a period of up to seven days before symptoms show. As a result, contacts arguably can’t be alerted speedily enough by conventional manual tracing, which obviously only starts after symptoms develop. Another issue is that traditional contact tracing is limited by the fact contacts might not be recalled or may be strangers unknown to the infected person. Apps that measured proximity and time of contact between persons were ballyhooed as the technical answer to both problems. Initial enthusiasm for contact-tracing apps has been tempered, however, by two key worries: privacy and efficacy. Apps had originally gained traction in Asia,