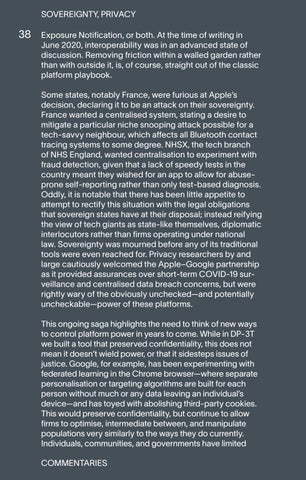 Exposure Notification, or both. At the time of writing in June 2020, interoperability was in an advanced state of discussion. Removing friction within a walled garden rather than with outside it, is, of course, straight out of the classic platform playbook. Some states, notably France, were furious at Apple’s decision, declaring it to be an attack on their sovereignty. France wanted a centralised system, stating a desire to mitigate a particular niche snooping attack possible for a tech-savvy neighbour, which affects all Bluetooth contact tracing systems to some degree. NHSX, the tech branch of NHS England, wanted centralisation to experiment with fraud detection, given that a lack of speedy tests in the country meant they wished for an app to allow for abuseprone self-reporting rather than only test-based diagnosis. Oddly, it is notable that there has been little appetite to attempt to rectify this situation with the legal obligations that sovereign states have at their disposal; instead reifying the view of tech giants as state-like themselves, diplomatic interlocutors rather than firms operating under national law. Sovereignty was mourned before any of its traditional tools were even reached for. Privacy researchers by and large cautiously welcomed the Apple–Google partnership as it provided assurances over short-term COVID-19 surveillance and centralised data breach concerns, but were rightly wary of the obviously unchecked—and potentially uncheckable—power of these platforms. This ongoing saga highlights the need to think of new ways to control platform power in years to come. While in DP-3T we built a tool that preserved confidentiality, this does not mean it doesn’t wield power, or that it sidesteps issues of justice. Google, for example, has been experimenting with federated learning in the Chrome browser—where separate personalisation or targeting algorithms are built for each person without much or any data leaving an individual’s device—and has toyed with abolishing third-party cookies. This would preserve confidentiality, but continue to allow firms to optimise, intermediate between, and manipulate populations very similarly to the ways they do currently. Individuals, communities, and governments have limited COMMENTARIES