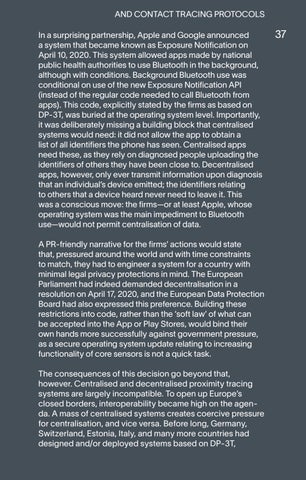 AND CONTACT TRACING PROTOCOLS In a surprising partnership, Apple and Google announced a system that became known as Exposure Notification on April 10, 2020. This system allowed apps made by national public health authorities to use Bluetooth in the background, although with conditions. Background Bluetooth use was conditional on use of the new Exposure Notification API (instead of the regular code needed to call Bluetooth from apps). This code, explicitly stated by the firms as based on DP-3T, was buried at the operating system level. Importantly, it was deliberately missing a building block that centralised systems would need: it did not allow the app to obtain a list of all identifiers the phone has seen. Centralised apps need these, as they rely on diagnosed people uploading the identifiers of others they have been close to. Decentralised apps, however, only ever transmit information upon diagnosis that an individual’s device emitted; the identifiers relating to others that a device heard never need to leave it. This was a conscious move: the firms—or at least Apple, whose operating system was the main impediment to Bluetooth use—would not permit centralisation of data. A PR-friendly narrative for the firms’ actions would state that, pressured around the world and with time constraints to match, they had to engineer a system for a country with minimal legal privacy protections in mind. The European Parliament had indeed demanded decentralisation in a resolution on April 17, 2020, and the European Data Protection Board had also expressed this preference. Building these restrictions into code, rather than the ‘soft law’ of what can be accepted into the App or Play Stores, would bind their own hands more successfully against government pressure, as a secure operating system update relating to increasing functionality of core sensors is not a quick task. The consequences of this decision go beyond that, however. Centralised and decentralised proximity tracing systems are largely incompatible. To open up Europe’s closed borders, interoperability became high on the agenda. A mass of centralised systems creates coercive pressure for centralisation, and vice versa. Before long, Germany, Switzerland, Estonia, Italy, and many more countries had designed and/or deployed systems based on DP-3T,