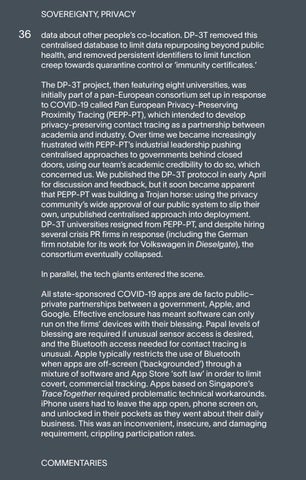 data about other people’s co-location. DP-3T removed this centralised database to limit data repurposing beyond public health, and removed persistent identifiers to limit function creep towards quarantine control or ‘immunity certificates.’ The DP-3T project, then featuring eight universities, was initially part of a pan-European consortium set up in response to COVID-19 called Pan European Privacy-Preserving Proximity Tracing (PEPP-PT), which intended to develop privacy-preserving contact tracing as a partnership between academia and industry. Over time we became increasingly frustrated with PEPP-PT’s industrial leadership pushing centralised approaches to governments behind closed doors, using our team’s academic credibility to do so, which concerned us. We published the DP-3T protocol in early April for discussion and feedback, but it soon became apparent that PEPP-PT was building a Trojan horse: using the privacy community’s wide approval of our public system to slip their own, unpublished centralised approach into deployment. DP-3T universities resigned from PEPP-PT, and despite hiring several crisis PR firms in response (including the German firm notable for its work for Volkswagen in Dieselgate), the consortium eventually collapsed. In parallel, the tech giants entered the scene. All state-sponsored COVID-19 apps are de facto public– private partnerships between a government, Apple, and Google. Effective enclosure has meant software can only run on the firms’ devices with their blessing. Papal levels of blessing are required if unusual sensor access is desired, and the Bluetooth access needed for contact tracing is unusual. Apple typically restricts the use of Bluetooth when apps are off-screen (‘backgrounded’) through a mixture of software and App Store ‘soft law’ in order to limit covert, commercial tracking. Apps based on Singapore’s TraceTogether required problematic technical workarounds. iPhone users had to leave the app open, phone screen on, and unlocked in their pockets as they went about their daily business. This was an inconvenient, insecure, and damaging requirement, crippling participation rates. COMMENTARIES