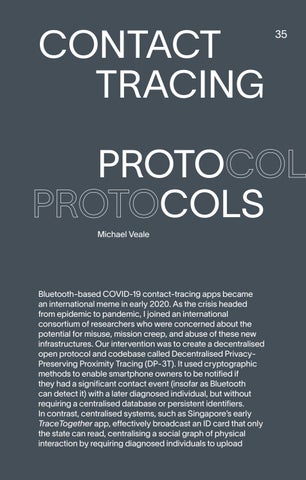 Bluetooth-based COVID-19 contact-tracing apps became an international meme in early 2020. As the crisis headed from epidemic to pandemic, I joined an international consortium of researchers who were concerned about the potential for misuse, mission creep, and abuse of these new infrastructures. Our intervention was to create a decentralised open protocol and codebase called Decentralised PrivacyPreserving Proximity Tracing (DP-3T). It used cryptographic methods to enable smartphone owners to be notified if they had a significant contact event (insofar as Bluetooth can detect it) with a later diagnosed individual, but without requiring a centralised database or persistent identifiers. In contrast, centralised systems, such as Singaporeâ&#x20AC;&#x2122;s early TraceTogether app, effectively broadcast an ID card that only the state can read, centralising a social graph of physical interaction by requiring diagnosed individuals to upload