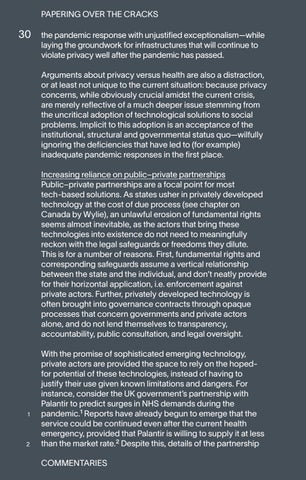 PAPERING OVER THE CRACKS

the pandemic response with unjustified exceptionalism—while laying the groundwork for infrastructures that will continue to violate privacy well after the pandemic has passed. Arguments about privacy versus health are also a distraction, or at least not unique to the current situation: because privacy concerns, while obviously crucial amidst the current crisis, are merely reflective of a much deeper issue stemming from the uncritical adoption of technological solutions to social problems. Implicit to this adoption is an acceptance of the institutional, structural and governmental status quo—wilfully ignoring the deficiencies that have led to (for example) inadequate pandemic responses in the first place. Increasing reliance on public–private partnerships Public–private partnerships are a focal point for most tech-based solutions. As states usher in privately developed technology at the cost of due process (see chapter on Canada by Wylie), an unlawful erosion of fundamental rights seems almost inevitable, as the actors that bring these technologies into existence do not need to meaningfully reckon with the legal safeguards or freedoms they dilute. This is for a number of reasons. First, fundamental rights and corresponding safeguards assume a vertical relationship between the state and the individual, and don’t neatly provide for their horizontal application, i.e. enforcement against private actors. Further, privately developed technology is often brought into governance contracts through opaque processes that concern governments and private actors alone, and do not lend themselves to transparency, accountability, public consultation, and legal oversight.

With the promise of sophisticated emerging technology, private actors are provided the space to rely on the hopedfor potential of these technologies, instead of having to justify their use given known limitations and dangers. For instance, consider the UK government’s partnership with Palantir to predict surges in NHS demands during the pandemic.1 Reports have already begun to emerge that the service could be continued even after the current health emergency, provided that Palantir is willing to supply it at less than the market rate.2 Despite this, details of the partnership COMMENTARIES