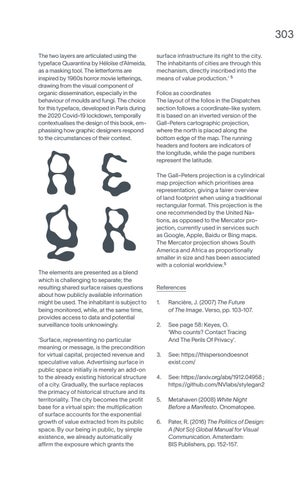 303 The two layers are articulated using the typeface Quarantina by Héloïse d’Almeida, as a masking tool. The letterforms are inspired by 1960s horror movie letterings, drawing from the visual component of organic dissemination, especially in the behaviour of moulds and fungi. The choice for this typeface, developed in Paris during the 2020 Covid-19 lockdown, temporally contextualises the design of this book, emphasising how graphic designers respond to the circumstances of their context.

surface infrastructure its right to the city. The inhabitants of cities are through this mechanism, directly inscribed into the means of value production.’ 5 Folios as coordinates The layout of the folios in the Dispatches section follows a coordinate-like system. It is based on an inverted version of the Gall-Peters cartographic projection, where the north is placed along the bottom edge of the map. The running headers and footers are indicators of the longitude, while the page numbers represent the latitude. The Gall-Peters projection is a cylindrical map projection which prioritises area representation, giving a fairer overview of land footprint when using a traditional rectangular format. This projection is the one recommended by the United Nations, as opposed to the Mercator projection, currently used in services such as Google, Apple, Baidu or Bing maps. The Mercator projection shows South America and Africa as proportionally smaller in size and has been associated with a colonial worldview.5

The elements are presented as a blend which is challenging to separate; the resulting shared surface raises questions about how publicly available information might be used. The inhabitant is subject to being monitored, while, at the same time, provides access to data and potential surveillance tools unknowingly. ‘Surface, representing no particular meaning or message, is the precondition for virtual capital, projected revenue and speculative value. Advertising surface in public space initially is merely an add-on to the already existing historical structure of a city. Gradually, the surface replaces the primacy of historical structure and its territoriality. The city becomes the profit base for a virtual spin: the multiplication of surface accounts for the exponential growth of value extracted from its public space. By our being in public, by simple existence, we already automatically affirm the exposure which grants the