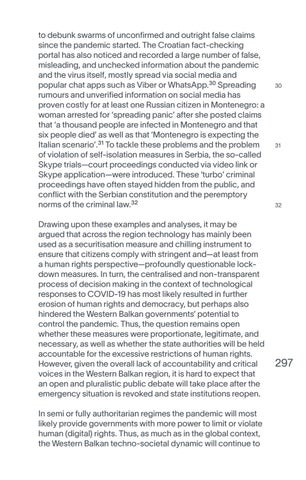 to debunk swarms of unconfirmed and outright false claims since the pandemic started. The Croatian fact-checking portal has also noticed and recorded a large number of false, misleading, and unchecked information about the pandemic and the virus itself, mostly spread via social media and popular chat apps such as Viber or WhatsApp.30 Spreading rumours and unverified information on social media has proven costly for at least one Russian citizen in Montenegro: a woman arrested for ‘spreading panic’ after she posted claims that ‘a thousand people are infected in Montenegro and that six people died’ as well as that ‘Montenegro is expecting the Italian scenario’.31 To tackle these problems and the problem of violation of self-isolation measures in Serbia, the so-called Skype trials—court proceedings conducted via video link or Skype application—were introduced. These ‘turbo’ criminal proceedings have often stayed hidden from the public, and conflict with the Serbian constitution and the peremptory norms of the criminal law.32 Drawing upon these examples and analyses, it may be argued that across the region technology has mainly been used as a securitisation measure and chilling instrument to ensure that citizens comply with stringent and—at least from a human rights perspective—profoundly questionable lockdown measures. In turn, the centralised and non-transparent process of decision making in the context of technological responses to COVID-19 has most likely resulted in further erosion of human rights and democracy, but perhaps also hindered the Western Balkan governments’ potential to control the pandemic. Thus, the question remains open whether these measures were proportionate, legitimate, and necessary, as well as whether the state authorities will be held accountable for the excessive restrictions of human rights. However, given the overall lack of accountability and critical voices in the Western Balkan region, it is hard to expect that an open and pluralistic public debate will take place after the emergency situation is revoked and state institutions reopen. In semi or fully authoritarian regimes the pandemic will most likely provide governments with more power to limit or violate human (digital) rights. Thus, as much as in the global context, the Western Balkan techno-societal dynamic will continue to