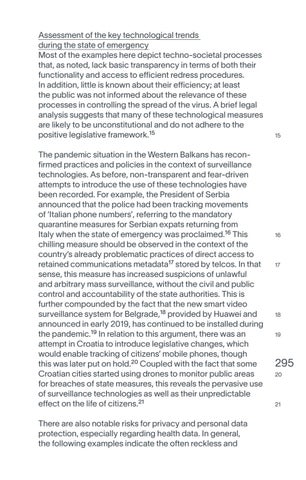 Assessment of the key technological trends during the state of emergency Most of the examples here depict techno-societal processes that, as noted, lack basic transparency in terms of both their functionality and access to efficient redress procedures. In addition, little is known about their efficiency; at least the public was not informed about the relevance of these processes in controlling the spread of the virus. A brief legal analysis suggests that many of these technological measures are likely to be unconstitutional and do not adhere to the positive legislative framework.15 The pandemic situation in the Western Balkans has reconfirmed practices and policies in the context of surveillance technologies. As before, non-transparent and fear-driven attempts to introduce the use of these technologies have been recorded. For example, the President of Serbia announced that the police had been tracking movements of ‘Italian phone numbers’, referring to the mandatory quarantine measures for Serbian expats returning from Italy when the state of emergency was proclaimed.16 This chilling measure should be observed in the context of the country’s already problematic practices of direct access to retained communications metadata17 stored by telcos. In that sense, this measure has increased suspicions of unlawful and arbitrary mass surveillance, without the civil and public control and accountability of the state authorities. This is further compounded by the fact that the new smart video surveillance system for Belgrade,18 provided by Huawei and announced in early 2019, has continued to be installed during the pandemic.19 In relation to this argument, there was an attempt in Croatia to introduce legislative changes, which would enable tracking of citizens’ mobile phones, though this was later put on hold.20 Coupled with the fact that some Croatian cities started using drones to monitor public areas for breaches of state measures, this reveals the pervasive use of surveillance technologies as well as their unpredictable effect on the life of citizens.21 There are also notable risks for privacy and personal data protection, especially regarding health data. In general, the following examples indicate the often reckless and