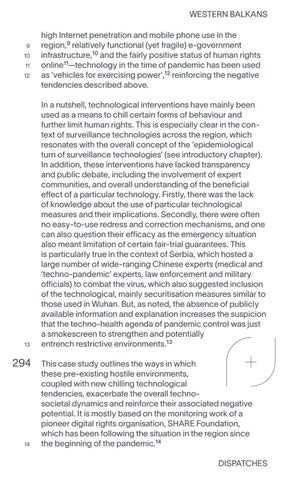 high Internet penetration and mobile phone use in the region,9 relatively functional (yet fragile) e-government infrastructure,10 and the fairly positive status of human rights online11—technology in the time of pandemic has been used as ‘vehicles for exercising power’,12 reinforcing the negative tendencies described above. In a nutshell, technological interventions have mainly been used as a means to chill certain forms of behaviour and further limit human rights. This is especially clear in the context of surveillance technologies across the region, which resonates with the overall concept of the ‘epidemiological turn of surveillance technologies’ (see introductory chapter). In addition, these interventions have lacked transparency and public debate, including the involvement of expert communities, and overall understanding of the beneficial effect of a particular technology. Firstly, there was the lack of knowledge about the use of particular technological measures and their implications. Secondly, there were often no easy-to-use redress and correction mechanisms, and one can also question their efficacy as the emergency situation also meant limitation of certain fair-trial guarantees. This is particularly true in the context of Serbia, which hosted a large number of wide-ranging Chinese experts (medical and ‘techno-pandemic’ experts, law enforcement and military officials) to combat the virus, which also suggested inclusion of the technological, mainly securitisation measures similar to those used in Wuhan. But, as noted, the absence of publicly available information and explanation increases the suspicion that the techno-health agenda of pandemic control was just a smokescreen to strengthen and potentially entrench restrictive environments.13 This case study outlines the ways in which these pre-existing hostile environments, coupled with new chilling technological tendencies, exacerbate the overall technosocietal dynamics and reinforce their associated negative potential. It is mostly based on the monitoring work of a pioneer digital rights organisation, SHARE Foundation, which has been following the situation in the region since the beginning of the pandemic.14 Dispatches