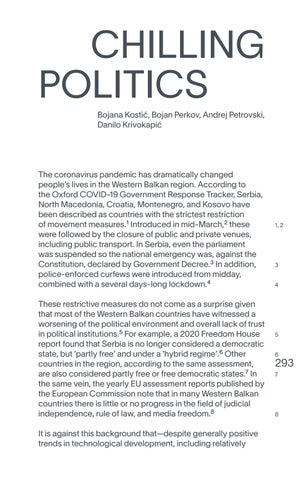 The coronavirus pandemic has dramatically changed people’s lives in the Western Balkan region. According to the Oxford COVID-19 Government Response Tracker, Serbia, North Macedonia, Croatia, Montenegro, and Kosovo have been described as countries with the strictest restriction of movement measures.1 Introduced in mid-March,2 these were followed by the closure of public and private venues, including public transport. In Serbia, even the parliament was suspended so the national emergency was, against the Constitution, declared by Government Decree.3 In addition, police-enforced curfews were introduced from midday, combined with a several days-long lockdown.4 These restrictive measures do not come as a surprise given that most of the Western Balkan countries have witnessed a worsening of the political environment and overall lack of trust in political institutions.5 For example, a 2020 Freedom House report found that Serbia is no longer considered a democratic state, but ‘partly free’ and under a ‘hybrid regime’.6 Other countries in the region, according to the same assessment, are also considered partly free or free democratic states.7 In the same vein, the yearly EU assessment reports published by the European Commission note that in many Western Balkan countries there is little or no progress in the field of judicial independence, rule of law, and media freedom.8 It is against this background that—despite generally positive trends in technological development, including relatively