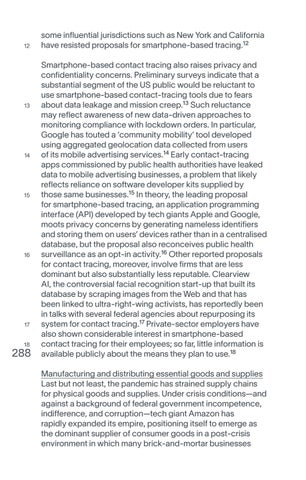 some influential jurisdictions such as New York and California have resisted proposals for smartphone-based tracing.12 Smartphone-based contact tracing also raises privacy and confidentiality concerns. Preliminary surveys indicate that a substantial segment of the US public would be reluctant to use smartphone-based contact-tracing tools due to fears about data leakage and mission creep.13 Such reluctance may reflect awareness of new data-driven approaches to monitoring compliance with lockdown orders. In particular, Google has touted a ‘community mobility’ tool developed using aggregated geolocation data collected from users of its mobile advertising services.14 Early contact-tracing apps commissioned by public health authorities have leaked data to mobile advertising businesses, a problem that likely reflects reliance on software developer kits supplied by those same businesses.15 In theory, the leading proposal for smartphone-based tracing, an application programming interface (API) developed by tech giants Apple and Google, moots privacy concerns by generating nameless identifiers and storing them on users’ devices rather than in a centralised database, but the proposal also reconceives public health surveillance as an opt-in activity.16 Other reported proposals for contact tracing, moreover, involve firms that are less dominant but also substantially less reputable. Clearview AI, the controversial facial recognition start-up that built its database by scraping images from the Web and that has been linked to ultra-right-wing activists, has reportedly been in talks with several federal agencies about repurposing its system for contact tracing.17 Private-sector employers have also shown considerable interest in smartphone-based contact tracing for their employees; so far, little information is available publicly about the means they plan to use.18 Manufacturing and distributing essential goods and supplies Last but not least, the pandemic has strained supply chains for physical goods and supplies. Under crisis conditions—and against a background of federal government incompetence, indifference, and corruption—tech giant Amazon has rapidly expanded its empire, positioning itself to emerge as the dominant supplier of consumer goods in a post-crisis environment in which many brick-and-mortar businesses