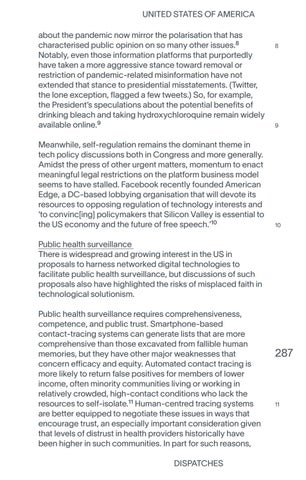 UNITED STATES OF AMERICA about the pandemic now mirror the polarisation that has characterised public opinion on so many other issues.8 Notably, even those information platforms that purportedly have taken a more aggressive stance toward removal or restriction of pandemic-related misinformation have not extended that stance to presidential misstatements. (Twitter, the lone exception, flagged a few tweets.) So, for example, the Presidentâ&#x20AC;&#x2122;s speculations about the potential benefits of drinking bleach and taking hydroxychloroquine remain widely available online.9 Meanwhile, self-regulation remains the dominant theme in tech policy discussions both in Congress and more generally. Amidst the press of other urgent matters, momentum to enact meaningful legal restrictions on the platform business model seems to have stalled. Facebook recently founded American Edge, a DC-based lobbying organisation that will devote its resources to opposing regulation of technology interests and â&#x20AC;&#x2DC;to convinc[ing] policymakers that Silicon Valley is essential to the US economy and the future of free speech.â&#x20AC;&#x2122;10

Public health surveillance There is widespread and growing interest in the US in proposals to harness networked digital technologies to facilitate public health surveillance, but discussions of such proposals also have highlighted the risks of misplaced faith in technological solutionism. Public health surveillance requires comprehensiveness, competence, and public trust. Smartphone-based contact-tracing systems can generate lists that are more comprehensive than those excavated from fallible human memories, but they have other major weaknesses that concern efficacy and equity. Automated contact tracing is more likely to return false positives for members of lower income, often minority communities living or working in relatively crowded, high-contact conditions who lack the resources to self-isolate.11 Human-centred tracing systems are better equipped to negotiate these issues in ways that encourage trust, an especially important consideration given that levels of distrust in health providers historically have been higher in such communities. In part for such reasons, Dispatches