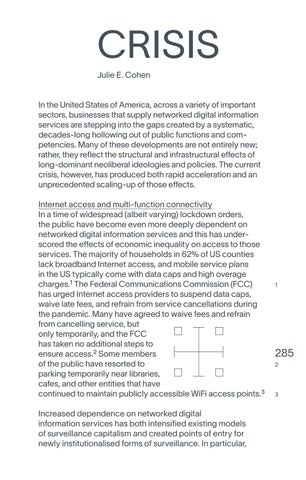 CRISIS Julie E. Cohen In the United States of America, across a variety of important sectors, businesses that supply networked digital information services are stepping into the gaps created by a systematic, decades-long hollowing out of public functions and competencies. Many of these developments are not entirely new; rather, they reflect the structural and infrastructural effects of long-dominant neoliberal ideologies and policies. The current crisis, however, has produced both rapid acceleration and an unprecedented scaling-up of those effects. Internet access and multi-function connectivity In a time of widespread (albeit varying) lockdown orders, the public have become even more deeply dependent on networked digital information services and this has underscored the effects of economic inequality on access to those services. The majority of households in 62% of US counties lack broadband Internet access, and mobile service plans in the US typically come with data caps and high overage charges.1 The Federal Communications Commission (FCC) has urged Internet access providers to suspend data caps, waive late fees, and refrain from service cancellations during the pandemic. Many have agreed to waive fees and refrain from cancelling service, but only temporarily, and the FCC has taken no additional steps to ensure access.2 Some members of the public have resorted to parking temporarily near libraries, cafes, and other entities that have continued to maintain publicly accessible WiFi access points.3 Increased dependence on networked digital information services has both intensified existing models of surveillance capitalism and created points of entry for newly institutionalised forms of surveillance. In particular,