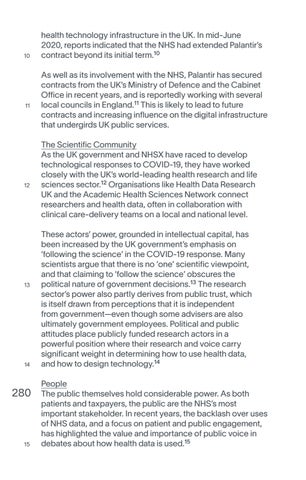 health technology infrastructure in the UK. In mid-June 2020, reports indicated that the NHS had extended Palantir’s contract beyond its initial term.10 As well as its involvement with the NHS, Palantir has secured contracts from the UK’s Ministry of Defence and the Cabinet Office in recent years, and is reportedly working with several local councils in England.11 This is likely to lead to future contracts and increasing influence on the digital infrastructure that undergirds UK public services. The Scientific Community As the UK government and NHSX have raced to develop technological responses to COVID-19, they have worked closely with the UK’s world-leading health research and life sciences sector.12 Organisations like Health Data Research UK and the Academic Health Sciences Network connect researchers and health data, often in collaboration with clinical care-delivery teams on a local and national level. These actors’ power, grounded in intellectual capital, has been increased by the UK government’s emphasis on ‘following the science’ in the COVID-19 response. Many scientists argue that there is no ‘one’ scientific viewpoint, and that claiming to ‘follow the science’ obscures the political nature of government decisions.13 The research sector’s power also partly derives from public trust, which is itself drawn from perceptions that it is independent from government—even though some advisers are also ultimately government employees. Political and public attitudes place publicly funded research actors in a powerful position where their research and voice carry significant weight in determining how to use health data, and how to design technology.14 People The public themselves hold considerable power. As both patients and taxpayers, the public are the NHS’s most important stakeholder. In recent years, the backlash over uses of NHS data, and a focus on patient and public engagement, has highlighted the value and importance of public voice in debates about how health data is used.15