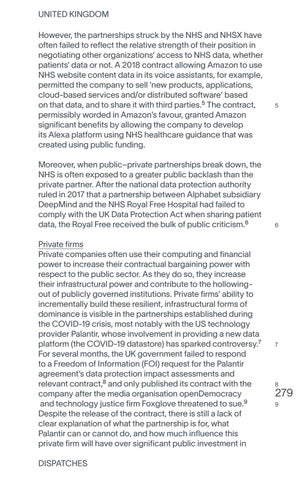 UNITED KINGDOM However, the partnerships struck by the NHS and NHSX have often failed to reflect the relative strength of their position in negotiating other organizations’ access to NHS data, whether patients’ data or not. A 2018 contract allowing Amazon to use NHS website content data in its voice assistants, for example, permitted the company to sell ‘new products, applications, cloud-based services and/or distributed software’ based on that data, and to share it with third parties.5 The contract, permissibly worded in Amazon’s favour, granted Amazon significant benefits by allowing the company to develop its Alexa platform using NHS healthcare guidance that was created using public funding. Moreover, when public–private partnerships break down, the NHS is often exposed to a greater public backlash than the private partner. After the national data protection authority ruled in 2017 that a partnership between Alphabet subsidiary DeepMind and the NHS Royal Free Hospital had failed to comply with the UK Data Protection Act when sharing patient data, the Royal Free received the bulk of public criticism.6 Private firms Private companies often use their computing and financial power to increase their contractual bargaining power with respect to the public sector. As they do so, they increase their infrastructural power and contribute to the hollowingout of publicly governed institutions. Private firms’ ability to incrementally build these resilient, infrastructural forms of dominance is visible in the partnerships established during the COVID-19 crisis, most notably with the US technology provider Palantir, whose involvement in providing a new data platform (the COVID-19 datastore) has sparked controversy.7 For several months, the UK government failed to respond to a Freedom of Information (FOI) request for the Palantir agreement’s data protection impact assessments and relevant contract,8 and only published its contract with the company after the media organisation openDemocracy and technology justice firm Foxglove threatened to sue.9 Despite the release of the contract, there is still a lack of clear explanation of what the partnership is for, what Palantir can or cannot do, and how much influence this private firm will have over significant public investment in Dispatches