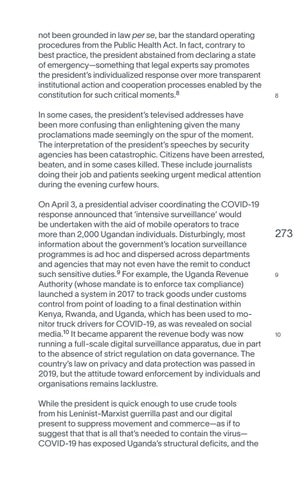 not been grounded in law per se, bar the standard operating procedures from the Public Health Act. In fact, contrary to best practice, the president abstained from declaring a state of emergency—something that legal experts say promotes the president’s individualized response over more transparent institutional action and cooperation processes enabled by the constitution for such critical moments.8

In some cases, the president’s televised addresses have been more confusing than enlightening given the many proclamations made seemingly on the spur of the moment. The interpretation of the president’s speeches by security agencies has been catastrophic. Citizens have been arrested, beaten, and in some cases killed. These include journalists doing their job and patients seeking urgent medical attention during the evening curfew hours. On April 3, a presidential adviser coordinating the COVID-19 response announced that ‘intensive surveillance’ would be undertaken with the aid of mobile operators to trace more than 2,000 Ugandan individuals. Disturbingly, most information about the government’s location surveillance programmes is ad hoc and dispersed across departments and agencies that may not even have the remit to conduct such sensitive duties.9 For example, the Uganda Revenue Authority (whose mandate is to enforce tax compliance) launched a system in 2017 to track goods under customs control from point of loading to a final destination within Kenya, Rwanda, and Uganda, which has been used to monitor truck drivers for COVID-19, as was revealed on social media.10 It became apparent the revenue body was now running a full-scale digital surveillance apparatus, due in part to the absence of strict regulation on data governance. The country’s law on privacy and data protection was passed in 2019, but the attitude toward enforcement by individuals and organisations remains lacklustre. While the president is quick enough to use crude tools from his Leninist-Marxist guerrilla past and our digital present to suppress movement and commerce—as if to suggest that that is all that’s needed to contain the virus— COVID-19 has exposed Uganda’s structural deficits, and the