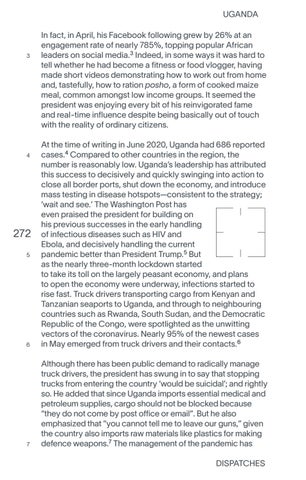 In fact, in April, his Facebook following grew by 26% at an engagement rate of nearly 785%, topping popular African leaders on social media.3 Indeed, in some ways it was hard to tell whether he had become a fitness or food vlogger, having made short videos demonstrating how to work out from home and, tastefully, how to ration posho, a form of cooked maize meal, common amongst low income groups. It seemed the president was enjoying every bit of his reinvigorated fame and real-time influence despite being basically out of touch with the reality of ordinary citizens.

At the time of writing in June 2020, Uganda had 686 reported cases.4 Compared to other countries in the region, the number is reasonably low. Uganda’s leadership has attributed this success to decisively and quickly swinging into action to close all border ports, shut down the economy, and introduce mass testing in disease hotspots—consistent to the strategy; ‘wait and see.’ The Washington Post has even praised the president for building on his previous successes in the early handling of infectious diseases such as HIV and Ebola, and decisively handling the current pandemic better than President Trump.5 But as the nearly three-month lockdown started to take its toll on the largely peasant economy, and plans to open the economy were underway, infections started to rise fast. Truck drivers transporting cargo from Kenyan and Tanzanian seaports to Uganda, and through to neighbouring countries such as Rwanda, South Sudan, and the Democratic Republic of the Congo, were spotlighted as the unwitting vectors of the coronavirus. Nearly 95% of the newest cases in May emerged from truck drivers and their contacts.6

Although there has been public demand to radically manage truck drivers, the president has swung in to say that stopping trucks from entering the country ‘would be suicidal’; and rightly so. He added that since Uganda imports essential medical and petroleum supplies, cargo should not be blocked because “they do not come by post office or email”. But he also emphasized that “you cannot tell me to leave our guns,” given the country also imports raw materials like plastics for making defence weapons.7 The management of the pandemic has