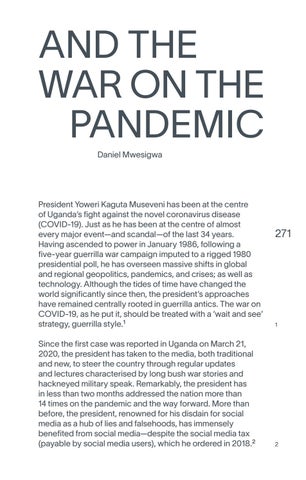 AND THE WAR ON THE  PANDEMIC Daniel Mwesigwa

President Yoweri Kaguta Museveni has been at the centre of Uganda’s fight against the novel coronavirus disease (COVID-19). Just as he has been at the centre of almost every major event—and scandal—of the last 34 years. Having ascended to power in January 1986, following a five-year guerrilla war campaign imputed to a rigged 1980 presidential poll, he has overseen massive shifts in global and regional geopolitics, pandemics, and crises; as well as technology. Although the tides of time have changed the world significantly since then, the president’s approaches have remained centrally rooted in guerrilla antics. The war on COVID-19, as he put it, should be treated with a ‘wait and see’ strategy, guerrilla style.1 Since the first case was reported in Uganda on March 21, 2020, the president has taken to the media, both traditional and new, to steer the country through regular updates and lectures characterised by long bush war stories and hackneyed military speak. Remarkably, the president has in less than two months addressed the nation more than 14 times on the pandemic and the way forward. More than before, the president, renowned for his disdain for social media as a hub of lies and falsehoods, has immensely benefited from social media—despite the social media tax (payable by social media users), which he ordered in 2018.2