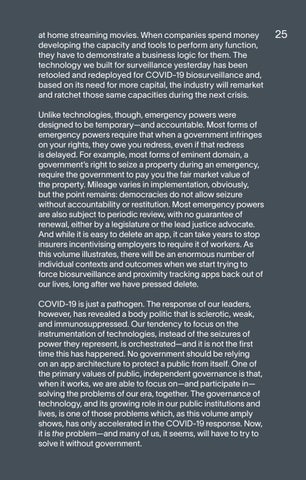 at home streaming movies. When companies spend money developing the capacity and tools to perform any function, they have to demonstrate a business logic for them. The technology we built for surveillance yesterday has been retooled and redeployed for COVID-19 biosurveillance and, based on its need for more capital, the industry will remarket and ratchet those same capacities during the next crisis. Unlike technologies, though, emergency powers were designed to be temporary—and accountable. Most forms of emergency powers require that when a government infringes on your rights, they owe you redress, even if that redress is delayed. For example, most forms of eminent domain, a government’s right to seize a property during an emergency, require the government to pay you the fair market value of the property. Mileage varies in implementation, obviously, but the point remains: democracies do not allow seizure without accountability or restitution. Most emergency powers are also subject to periodic review, with no guarantee of renewal, either by a legislature or the lead justice advocate. And while it is easy to delete an app, it can take years to stop insurers incentivising employers to require it of workers. As this volume illustrates, there will be an enormous number of individual contexts and outcomes when we start trying to force biosurveillance and proximity tracking apps back out of our lives, long after we have pressed delete. COVID-19 is just a pathogen. The response of our leaders, however, has revealed a body politic that is sclerotic, weak, and immunosuppressed. Our tendency to focus on the instrumentation of technologies, instead of the seizures of power they represent, is orchestrated—and it is not the first time this has happened. No government should be relying on an app architecture to protect a public from itself. One of the primary values of public, independent governance is that, when it works, we are able to focus on—and participate in— solving the problems of our era, together. The governance of technology, and its growing role in our public institutions and lives, is one of those problems which, as this volume amply shows, has only accelerated in the COVID-19 response. Now, it is the problem—and many of us, it seems, will have to try to solve it without government.