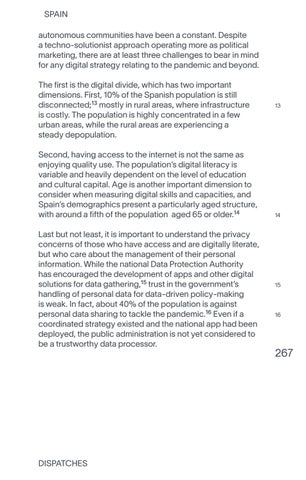 SPAIN autonomous communities have been a constant. Despite a techno-solutionist approach operating more as political marketing, there are at least three challenges to bear in mind for any digital strategy relating to the pandemic and beyond. The first is the digital divide, which has two important dimensions. First, 10% of the Spanish population is still disconnected;13 mostly in rural areas, where infrastructure is costly. The population is highly concentrated in a few urban areas, while the rural areas are experiencing a steady depopulation. Second, having access to the internet is not the same as enjoying quality use. The populationâ&#x20AC;&#x2122;s digital literacy is variable and heavily dependent on the level of education and cultural capital. Age is another important dimension to consider when measuring digital skills and capacities, and Spainâ&#x20AC;&#x2122;s demographics present a particularly aged structure, with around a fifth of the population aged 65 or older.14 Last but not least, it is important to understand the privacy concerns of those who have access and are digitally literate, but who care about the management of their personal information. While the national Data Protection Authority has encouraged the development of apps and other digital solutions for data gathering,15 trust in the governmentâ&#x20AC;&#x2122;s handling of personal data for data-driven policy-making is weak. In fact, about 40% of the population is against personal data sharing to tackle the pandemic.16 Even if a coordinated strategy existed and the national app had been deployed, the public administration is not yet considered to be a trustworthy data processor.