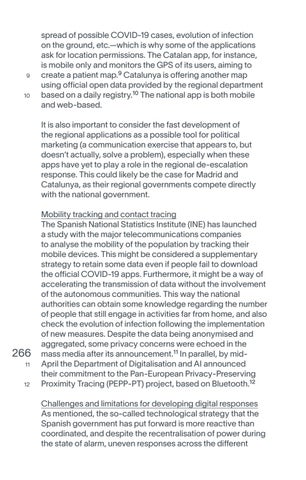 spread of possible COVID-19 cases, evolution of infection on the ground, etc.â&#x20AC;&#x201D;which is why some of the applications ask for location permissions. The Catalan app, for instance, is mobile only and monitors the GPS of its users, aiming to create a patient map.9 Catalunya is offering another map using official open data provided by the regional department based on a daily registry.10 The national app is both mobile and web-based. It is also important to consider the fast development of the regional applications as a possible tool for political marketing (a communication exercise that appears to, but doesnâ&#x20AC;&#x2122;t actually, solve a problem), especially when these apps have yet to play a role in the regional de-escalation response. This could likely be the case for Madrid and Catalunya, as their regional governments compete directly with the national government.

Mobility tracking and contact tracing The Spanish National Statistics Institute (INE) has launched a study with the major telecommunications companies to analyse the mobility of the population by tracking their mobile devices. This might be considered a supplementary strategy to retain some data even if people fail to download the official COVID-19 apps. Furthermore, it might be a way of accelerating the transmission of data without the involvement of the autonomous communities. This way the national authorities can obtain some knowledge regarding the number of people that still engage in activities far from home, and also check the evolution of infection following the implementation of new measures. Despite the data being anonymised and aggregated, some privacy concerns were echoed in the mass media after its announcement.11 In parallel, by midApril the Department of Digitalisation and AI announced their commitment to the Pan-European Privacy-Preserving Proximity Tracing (PEPP-PT) project, based on Bluetooth.12 Challenges and limitations for developing digital responses As mentioned, the so-called technological strategy that the Spanish government has put forward is more reactive than coordinated, and despite the recentralisation of power during the state of alarm, uneven responses across the different