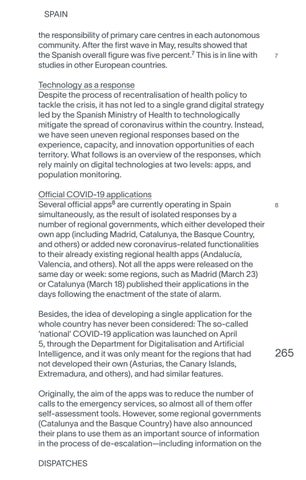 SPAIN the responsibility of primary care centres in each autonomous community. After the first wave in May, results showed that the Spanish overall figure was five percent.7 This is in line with studies in other European countries.

Technology as a response Despite the process of recentralisation of health policy to tackle the crisis, it has not led to a single grand digital strategy led by the Spanish Ministry of Health to technologically mitigate the spread of coronavirus within the country. Instead, we have seen uneven regional responses based on the experience, capacity, and innovation opportunities of each territory. What follows is an overview of the responses, which rely mainly on digital technologies at two levels: apps, and population monitoring. Official COVID-19 applications Several official apps8 are currently operating in Spain simultaneously, as the result of isolated responses by a number of regional governments, which either developed their own app (including Madrid, Catalunya, the Basque Country, and others) or added new coronavirus-related functionalities to their already existing regional health apps (Andalucía, Valencia, and others). Not all the apps were released on the same day or week: some regions, such as Madrid (March 23) or Catalunya (March 18) published their applications in the days following the enactment of the state of alarm. Besides, the idea of developing a single application for the whole country has never been considered: The so-called ‘national’ COVID-19 application was launched on April 5, through the Department for Digitalisation and Artificial Intelligence, and it was only meant for the regions that had not developed their own (Asturias, the Canary Islands, Extremadura, and others), and had similar features. Originally, the aim of the apps was to reduce the number of calls to the emergency services, so almost all of them offer self-assessment tools. However, some regional governments (Catalunya and the Basque Country) have also announced their plans to use them as an important source of information in the process of de-escalation—including information on the Dispatches