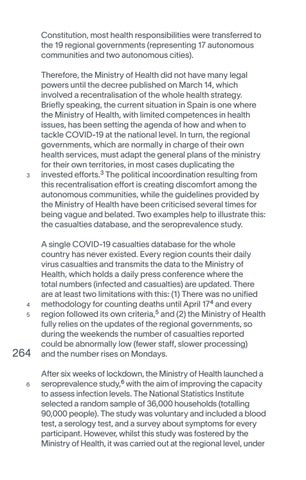 Therefore, the Ministry of Health did not have many legal powers until the decree published on March 14, which involved a recentralisation of the whole health strategy. Briefly speaking, the current situation in Spain is one where the Ministry of Health, with limited competences in health issues, has been setting the agenda of how and when to tackle COVID-19 at the national level. In turn, the regional governments, which are normally in charge of their own health services, must adapt the general plans of the ministry for their own territories, in most cases duplicating the invested efforts.3 The political incoordination resulting from this recentralisation effort is creating discomfort among the autonomous communities, while the guidelines provided by the Ministry of Health have been criticised several times for being vague and belated. Two examples help to illustrate this: the casualties database, and the seroprevalence study. A single COVID-19 casualties database for the whole country has never existed. Every region counts their daily virus casualties and transmits the data to the Ministry of Health, which holds a daily press conference where the total numbers (infected and casualties) are updated. There are at least two limitations with this: (1) There was no unified methodology for counting deaths until April 174 and every region followed its own criteria,5 and (2) the Ministry of Health fully relies on the updates of the regional governments, so during the weekends the number of casualties reported could be abnormally low (fewer staff, slower processing) and the number rises on Mondays. After six weeks of lockdown, the Ministry of Health launched a seroprevalence study,6 with the aim of improving the capacity to assess infection levels. The National Statistics Institute selected a random sample of 36,000 households (totalling 90,000 people). The study was voluntary and included a blood test, a serology test, and a survey about symptoms for every participant. However, whilst this study was fostered by the Ministry of Health, it was carried out at the regional level, under