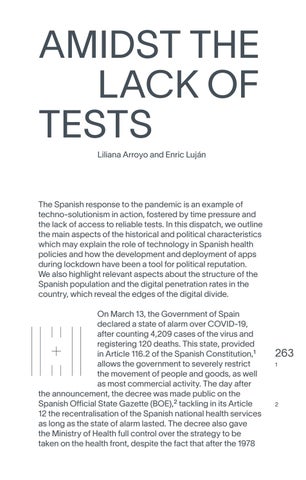 AMIDST THE LACK OF TESTS Liliana Arroyo and Enric Lujรกn

The Spanish response to the pandemic is an example of techno-solutionism in action, fostered by time pressure and the lack of access to reliable tests. In this dispatch, we outline the main aspects of the historical and political characteristics which may explain the role of technology in Spanish health policies and how the development and deployment of apps during lockdown have been a tool for political reputation. We also highlight relevant aspects about the structure of the Spanish population and the digital penetration rates in the country, which reveal the edges of the digital divide. On March 13, the Government of Spain declared a state of alarm over COVID-19, after counting 4,209 cases of the virus and registering 120 deaths. This state, provided in Article 116.2 of the Spanish Constitution,1 allows the government to severely restrict the movement of people and goods, as well as most commercial activity. The day after the announcement, the decree was made public on the Spanish Official State Gazette (BOE),2 tackling in its Article 12 the recentralisation of the Spanish national health services as long as the state of alarm lasted. The decree also gave the Ministry of Health full control over the strategy to be taken on the health front, despite the fact that after the 1978