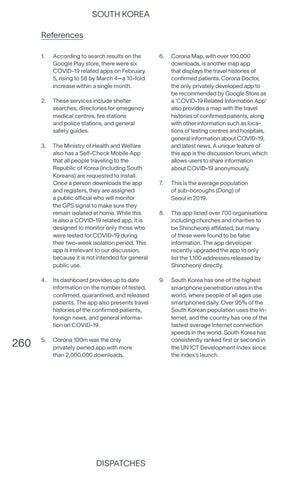 According to search results on the Google Play store, there were six COVID-19 related apps on February 5, rising to 58 by March 4—a 10-fold increase within a single month.

Corona Map, with over 100,000 downloads, is another map app that displays the travel histories of confirmed patients. Corona Doctor, the only privately developed app to be recommended by Google Store as a ‘COVID-19 Related Information App’ also provides a map with the travel histories of confirmed patients, along with other information such as locations of testing centres and hospitals, general information about COVID-19, and latest news. A unique feature of this app is the discussion forum, which allows users to share information about COVID-19 anonymously.

This is the average population of sub-boroughs (Dong) of Seoul in 2019.

The Ministry of Health and Welfare also has a Self-Check Mobile App that all people traveling to the Republic of Korea (including South Koreans) are requested to install. Once a person downloads the app and registers, they are assigned a public official who will monitor the GPS signal to make sure they remain isolated at home. While this is also a COVID-19 related app, it is designed to monitor only those who were tested for COVID-19 during their two-week isolation period. This app is irrelevant to our discussion, because it is not intended for general public use.

4. Its dashboard provides up to date information on the number of tested, confirmed, quarantined, and released patients. The app also presents travel histories of the confirmed patients, foreign news, and general information on COVID-19.

8. The app listed over 700 organisations including churches and charities to be Shincheonji affiliated, but many of these were found to be false information. The app developer recently upgraded the app to only list the 1,100 addresses released by Shincheonji directly. 9. South Korea has one of the highest smartphone penetration rates in the world, where people of all ages use smartphones daily. Over 95% of the South Korean population uses the Internet, and the country has one of the fastest average Internet connection speeds in the world. South Korea has consistently ranked first or second in the UN ICT Development Index since the index’s launch.