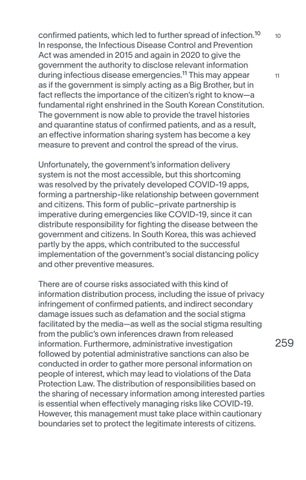 confirmed patients, which led to further spread of infection.10 In response, the Infectious Disease Control and Prevention Act was amended in 2015 and again in 2020 to give the government the authority to disclose relevant information during infectious disease emergencies.11 This may appear as if the government is simply acting as a Big Brother, but in fact reflects the importance of the citizen’s right to know—a fundamental right enshrined in the South Korean Constitution. The government is now able to provide the travel histories and quarantine status of confirmed patients, and as a result, an effective information sharing system has become a key measure to prevent and control the spread of the virus.

Unfortunately, the government’s information delivery system is not the most accessible, but this shortcoming was resolved by the privately developed COVID-19 apps, forming a partnership-like relationship between government and citizens. This form of public–private partnership is imperative during emergencies like COVID-19, since it can distribute responsibility for fighting the disease between the government and citizens. In South Korea, this was achieved partly by the apps, which contributed to the successful implementation of the government’s social distancing policy and other preventive measures. There are of course risks associated with this kind of information distribution process, including the issue of privacy infringement of confirmed patients, and indirect secondary damage issues such as defamation and the social stigma facilitated by the media—as well as the social stigma resulting from the public’s own inferences drawn from released information. Furthermore, administrative investigation followed by potential administrative sanctions can also be conducted in order to gather more personal information on people of interest, which may lead to violations of the Data Protection Law. The distribution of responsibilities based on the sharing of necessary information among interested parties is essential when effectively managing risks like COVID-19. However, this management must take place within cautionary boundaries set to protect the legitimate interests of citizens.