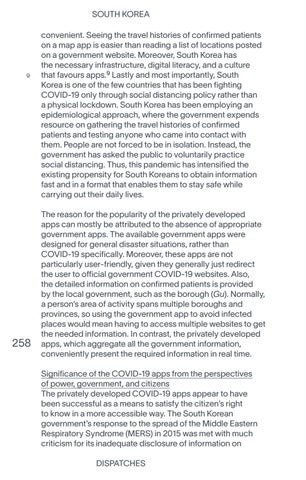 convenient. Seeing the travel histories of confirmed patients on a map app is easier than reading a list of locations posted on a government website. Moreover, South Korea has the necessary infrastructure, digital literacy, and a culture that favours apps.9 Lastly and most importantly, South Korea is one of the few countries that has been fighting COVID-19 only through social distancing policy rather than a physical lockdown. South Korea has been employing an epidemiological approach, where the government expends resource on gathering the travel histories of confirmed patients and testing anyone who came into contact with them. People are not forced to be in isolation. Instead, the government has asked the public to voluntarily practice social distancing. Thus, this pandemic has intensified the existing propensity for South Koreans to obtain information fast and in a format that enables them to stay safe while carrying out their daily lives. The reason for the popularity of the privately developed apps can mostly be attributed to the absence of appropriate government apps. The available government apps were designed for general disaster situations, rather than COVID-19 specifically. Moreover, these apps are not particularly user-friendly, given they generally just redirect the user to official government COVID-19 websites. Also, the detailed information on confirmed patients is provided by the local government, such as the borough (Gu). Normally, a personâ&#x20AC;&#x2122;s area of activity spans multiple boroughs and provinces, so using the government app to avoid infected places would mean having to access multiple websites to get the needed information. In contrast, the privately developed apps, which aggregate all the government information, conveniently present the required information in real time. Significance of the COVID-19 apps from the perspectives of power, government, and citizens The privately developed COVID-19 apps appear to have been successful as a means to satisfy the citizenâ&#x20AC;&#x2122;s right to know in a more accessible way. The South Korean governmentâ&#x20AC;&#x2122;s response to the spread of the Middle Eastern Respiratory Syndrome (MERS) in 2015 was met with much criticism for its inadequate disclosure of information on Dispatches