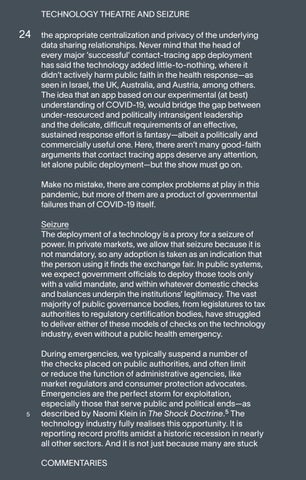 the appropriate centralization and privacy of the underlying data sharing relationships. Never mind that the head of every major ‘successful’ contact-tracing app deployment has said the technology added little-to-nothing, where it didn’t actively harm public faith in the health response—as seen in Israel, the UK, Australia, and Austria, among others. The idea that an app based on our experimental (at best) understanding of COVID-19, would bridge the gap between under-resourced and politically intransigent leadership and the delicate, difficult requirements of an effective, sustained response effort is fantasy—albeit a politically and commercially useful one. Here, there aren’t many good-faith arguments that contact tracing apps deserve any attention, let alone public deployment—but the show must go on. Make no mistake, there are complex problems at play in this pandemic, but more of them are a product of governmental failures than of COVID-19 itself. Seizure The deployment of a technology is a proxy for a seizure of power. In private markets, we allow that seizure because it is not mandatory, so any adoption is taken as an indication that the person using it finds the exchange fair. In public systems, we expect government officials to deploy those tools only with a valid mandate, and within whatever domestic checks and balances underpin the institutions’ legitimacy. The vast majority of public governance bodies, from legislatures to tax authorities to regulatory certification bodies, have struggled to deliver either of these models of checks on the technology industry, even without a public health emergency.

During emergencies, we typically suspend a number of the checks placed on public authorities, and often limit or reduce the function of administrative agencies, like market regulators and consumer protection advocates. Emergencies are the perfect storm for exploitation, especially those that serve public and political ends—as described by Naomi Klein in The Shock Doctrine.5 The technology industry fully realises this opportunity. It is reporting record profits amidst a historic recession in nearly all other sectors. And it is not just because many are stuck COMMENTARIES