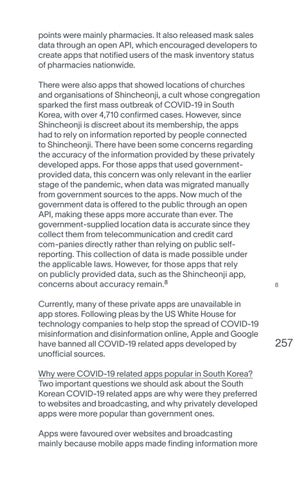 points were mainly pharmacies. It also released mask sales data through an open API, which encouraged developers to create apps that notified users of the mask inventory status of pharmacies nationwide. There were also apps that showed locations of churches and organisations of Shincheonji, a cult whose congregation sparked the first mass outbreak of COVID-19 in South Korea, with over 4,710 confirmed cases. However, since Shincheonji is discreet about its membership, the apps had to rely on information reported by people connected to Shincheonji. There have been some concerns regarding the accuracy of the information provided by these privately developed apps. For those apps that used governmentprovided data, this concern was only relevant in the earlier stage of the pandemic, when data was migrated manually from government sources to the apps. Now much of the government data is offered to the public through an open API, making these apps more accurate than ever. The government-supplied location data is accurate since they collect them from telecommunication and credit card com-panies directly rather than relying on public selfreporting. This collection of data is made possible under the applicable laws. However, for those apps that rely on publicly provided data, such as the Shincheonji app, concerns about accuracy remain.8 Currently, many of these private apps are unavailable in app stores. Following pleas by the US White House for technology companies to help stop the spread of COVID-19 misinformation and disinformation online, Apple and Google have banned all COVID-19 related apps developed by unofficial sources. Why were COVID-19 related apps popular in South Korea? Two important questions we should ask about the South Korean COVID-19 related apps are why were they preferred to websites and broadcasting, and why privately developed apps were more popular than government ones. Apps were favoured over websites and broadcasting mainly because mobile apps made finding information more