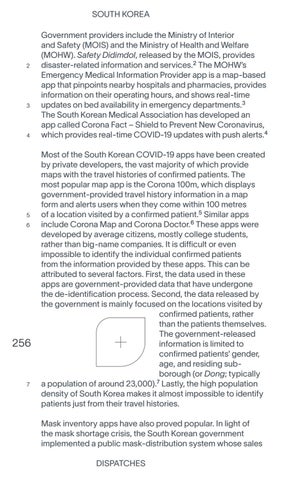 Government providers include the Ministry of Interior and Safety (MOIS) and the Ministry of Health and Welfare (MOHW). Safety Didimdol, released by the MOIS, provides disaster-related information and services.2 The MOHWâ&#x20AC;&#x2122;s Emergency Medical Information Provider app is a map-based app that pinpoints nearby hospitals and pharmacies, provides information on their operating hours, and shows real-time updates on bed availability in emergency departments.3 The South Korean Medical Association has developed an app called Corona Fact â&#x20AC;&#x201C; Shield to Prevent New Coronavirus, which provides real-time COVID-19 updates with push alerts.4 Most of the South Korean COVID-19 apps have been created by private developers, the vast majority of which provide maps with the travel histories of confirmed patients. The most popular map app is the Corona 100m, which displays government-provided travel history information in a map form and alerts users when they come within 100 metres of a location visited by a confirmed patient.5 Similar apps include Corona Map and Corona Doctor.6 These apps were developed by average citizens, mostly college students, rather than big-name companies. It is difficult or even impossible to identify the individual confirmed patients from the information provided by these apps. This can be attributed to several factors. First, the data used in these apps are government-provided data that have undergone the de-identification process. Second, the data released by the government is mainly focused on the locations visited by confirmed patients, rather than the patients themselves. The government-released information is limited to confirmed patientsâ&#x20AC;&#x2122; gender, age, and residing subborough (or Dong; typically a population of around 23,000).7 Lastly, the high population density of South Korea makes it almost impossible to identify patients just from their travel histories. Mask inventory apps have also proved popular. In light of the mask shortage crisis, the South Korean government implemented a public mask-distribution system whose sales Dispatches