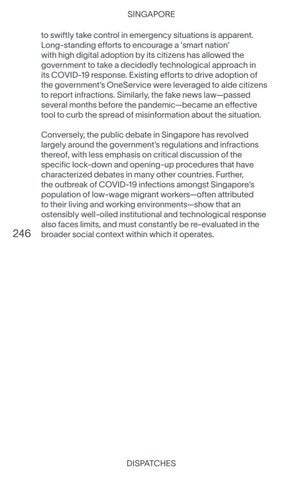 SINGAPORE to swiftly take control in emergency situations is apparent. Long-standing efforts to encourage a ‘smart nation’ with high digital adoption by its citizens has allowed the government to take a decidedly technological approach in its COVID-19 response. Existing efforts to drive adoption of the government’s OneService were leveraged to aide citizens to report infractions. Similarly, the fake news law—passed several months before the pandemic—became an effective tool to curb the spread of misinformation about the situation.

Conversely, the public debate in Singapore has revolved largely around the government’s regulations and infractions thereof, with less emphasis on critical discussion of the specific lock-down and opening-up procedures that have characterized debates in many other countries. Further, the outbreak of COVID-19 infections amongst Singapore’s population of low-wage migrant workers—often attributed to their living and working environments—show that an ostensibly well-oiled institutional and technological response also faces limits, and must constantly be re-evaluated in the broader social context within which it operates.