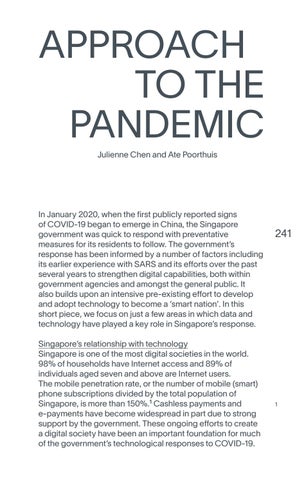 APPROACH TO THE PANDEMIC Julienne Chen and Ate Poorthuis

In January 2020, when the first publicly reported signs of COVID-19 began to emerge in China, the Singapore government was quick to respond with preventative measures for its residents to follow. The government’s response has been informed by a number of factors including its earlier experience with SARS and its efforts over the past several years to strengthen digital capabilities, both within government agencies and amongst the general public. It also builds upon an intensive pre-existing effort to develop and adopt technology to become a ‘smart nation’. In this short piece, we focus on just a few areas in which data and technology have played a key role in Singapore’s response. Singapore’s relationship with technology Singapore is one of the most digital societies in the world. 98% of households have Internet access and 89% of individuals aged seven and above are Internet users. The mobile penetration rate, or the number of mobile (smart) phone subscriptions divided by the total population of Singapore, is more than 150%.1 Cashless payments and e-payments have become widespread in part due to strong support by the government. These ongoing efforts to create a digital society have been an important foundation for much of the government’s technological responses to COVID-19.