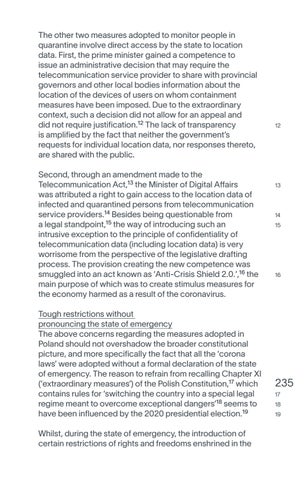 The other two measures adopted to monitor people in quarantine involve direct access by the state to location data. First, the prime minister gained a competence to issue an administrative decision that may require the telecommunication service provider to share with provincial governors and other local bodies information about the location of the devices of users on whom containment measures have been imposed. Due to the extraordinary context, such a decision did not allow for an appeal and did not require justification.12 The lack of transparency is amplified by the fact that neither the government’s requests for individual location data, nor responses thereto, are shared with the public. Second, through an amendment made to the Telecommunication Act,13 the Minister of Digital Affairs was attributed a right to gain access to the location data of infected and quarantined persons from telecommunication service providers.14 Besides being questionable from a legal standpoint,15 the way of introducing such an intrusive exception to the principle of confidentiality of telecommunication data (including location data) is very worrisome from the perspective of the legislative drafting process. The provision creating the new competence was smuggled into an act known as ‘Anti-Crisis Shield 2.0.’,16 the main purpose of which was to create stimulus measures for the economy harmed as a result of the coronavirus. Tough restrictions without pronouncing the state of emergency The above concerns regarding the measures adopted in Poland should not overshadow the broader constitutional picture, and more specifically the fact that all the ‘corona laws’ were adopted without a formal declaration of the state of emergency. The reason to refrain from recalling Chapter XI (‘extraordinary measures’) of the Polish Constitution,17 which contains rules for ‘switching the country into a special legal regime meant to overcome exceptional dangers’18 seems to have been influenced by the 2020 presidential election.19 Whilst, during the state of emergency, the introduction of certain restrictions of rights and freedoms enshrined in the