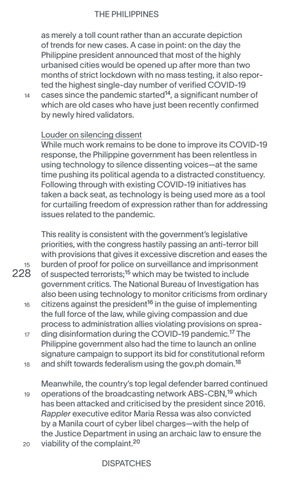 as merely a toll count rather than an accurate depiction of trends for new cases. A case in point: on the day the Philippine president announced that most of the highly urbanised cities would be opened up after more than two months of strict lockdown with no mass testing, it also reported the highest single-day number of verified COVID-19 cases since the pandemic started14, a significant number of which are old cases who have just been recently confirmed by newly hired validators. Louder on silencing dissent While much work remains to be done to improve its COVID-19 response, the Philippine government has been relentless in using technology to silence dissenting voices—at the same time pushing its political agenda to a distracted constituency. Following through with existing COVID-19 initiatives has taken a back seat, as technology is being used more as a tool for curtailing freedom of expression rather than for addressing issues related to the pandemic.

This reality is consistent with the government’s legislative priorities, with the congress hastily passing an anti-terror bill with provisions that gives it excessive discretion and eases the burden of proof for police on surveillance and imprisonment of suspected terrorists;15 which may be twisted to include government critics. The National Bureau of Investigation has also been using technology to monitor criticisms from ordinary citizens against the president16 in the guise of implementing the full force of the law, while giving compassion and due process to administration allies violating provisions on spreading disinformation during the COVID-19 pandemic.17 The Philippine government also had the time to launch an online signature campaign to support its bid for constitutional reform and shift towards federalism using the gov.ph domain.18 Meanwhile, the country’s top legal defender barred continued operations of the broadcasting network ABS-CBN,19 which has been attacked and criticised by the president since 2016. Rappler executive editor Maria Ressa was also convicted by a Manila court of cyber libel charges—with the help of the Justice Department in using an archaic law to ensure the viability of the complaint.20 Dispatches