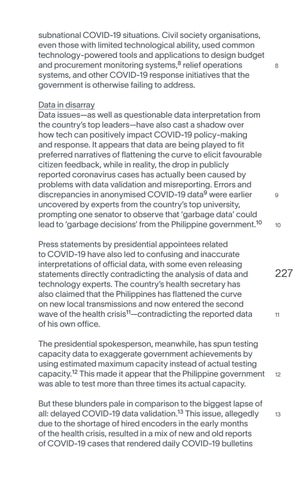 subnational COVID-19 situations. Civil society organisations, even those with limited technological ability, used common technology-powered tools and applications to design budget and procurement monitoring systems,8 relief operations systems, and other COVID-19 response initiatives that the government is otherwise failing to address. Data in disarray Data issues—as well as questionable data interpretation from the country’s top leaders—have also cast a shadow over how tech can positively impact COVID-19 policy-making and response. It appears that data are being played to fit preferred narratives of flattening the curve to elicit favourable citizen feedback, while in reality, the drop in publicly reported coronavirus cases has actually been caused by problems with data validation and misreporting. Errors and discrepancies in anonymised COVID-19 data9 were earlier uncovered by experts from the country’s top university, prompting one senator to observe that ‘garbage data’ could lead to ‘garbage decisions’ from the Philippine government.10 Press statements by presidential appointees related to COVID-19 have also led to confusing and inaccurate interpretations of official data, with some even releasing statements directly contradicting the analysis of data and technology experts. The country’s health secretary has also claimed that the Philippines has flattened the curve on new local transmissions and now entered the second wave of the health crisis11—contradicting the reported data of his own office. The presidential spokesperson, meanwhile, has spun testing capacity data to exaggerate government achievements by using estimated maximum capacity instead of actual testing capacity.12 This made it appear that the Philippine government was able to test more than three times its actual capacity. But these blunders pale in comparison to the biggest lapse of all: delayed COVID-19 data validation.13 This issue, allegedly due to the shortage of hired encoders in the early months of the health crisis, resulted in a mix of new and old reports of COVID-19 cases that rendered daily COVID-19 bulletins