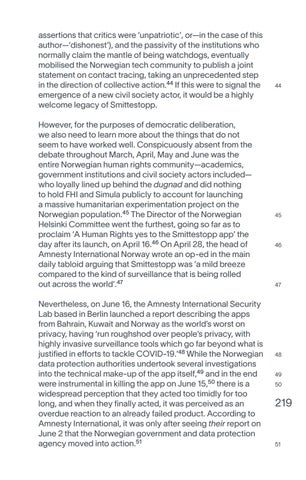 assertions that critics were ‘unpatriotic’, or—in the case of this author—‘dishonest’), and the passivity of the institutions who normally claim the mantle of being watchdogs, eventually mobilised the Norwegian tech community to publish a joint statement on contact tracing, taking an unprecedented step in the direction of collective action.44 If this were to signal the emergence of a new civil society actor, it would be a highly welcome legacy of Smittestopp. However, for the purposes of democratic deliberation, we also need to learn more about the things that do not seem to have worked well. Conspicuously absent from the debate throughout March, April, May and June was the entire Norwegian human rights community—academics, government institutions and civil society actors included— who loyally lined up behind the dugnad and did nothing to hold FHI and Simula publicly to account for launching a massive humanitarian experimentation project on the Norwegian population.45 The Director of the Norwegian Helsinki Committee went the furthest, going so far as to proclaim ‘A Human Rights yes to the Smittestopp app’ the day after its launch, on April 16.46 On April 28, the head of Amnesty International Norway wrote an op-ed in the main daily tabloid arguing that Smittestopp was ‘a mild breeze compared to the kind of surveillance that is being rolled out across the world’.47 Nevertheless, on June 16, the Amnesty International Security Lab based in Berlin launched a report describing the apps from Bahrain, Kuwait and Norway as the world’s worst on privacy, having ‘run roughshod over people’s privacy, with highly invasive surveillance tools which go far beyond what is justified in efforts to tackle COVID-19.’48 While the Norwegian data protection authorities undertook several investigations into the technical make-up of the app itself,49 and in the end were instrumental in killing the app on June 15,50 there is a widespread perception that they acted too timidly for too long, and when they finally acted, it was perceived as an overdue reaction to an already failed product. According to Amnesty International, it was only after seeing their report on June 2 that the Norwegian government and data protection agency moved into action.51