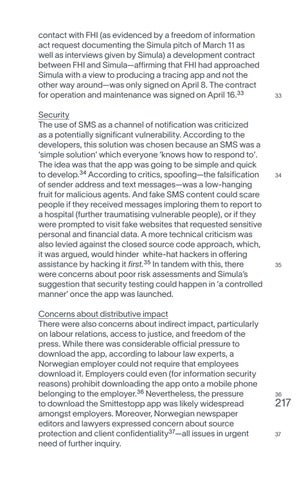 contact with FHI (as evidenced by a freedom of information act request documenting the Simula pitch of March 11 as well as interviews given by Simula) a development contract between FHI and Simula—affirming that FHI had approached Simula with a view to producing a tracing app and not the other way around—was only signed on April 8. The contract for operation and maintenance was signed on April 16.33 Security The use of SMS as a channel of notification was criticized as a potentially significant vulnerability. According to the developers, this solution was chosen because an SMS was a ‘simple solution’ which everyone ‘knows how to respond to’. The idea was that the app was going to be simple and quick to develop.34 According to critics, spoofing—the falsification of sender address and text messages—was a low-hanging fruit for malicious agents. And fake SMS content could scare people if they received messages imploring them to report to a hospital (further traumatising vulnerable people), or if they were prompted to visit fake websites that requested sensitive personal and financial data. A more technical criticism was also levied against the closed source code approach, which, it was argued, would hinder white-hat hackers in offering assistance by hacking it first.35 In tandem with this, there were concerns about poor risk assessments and Simula’s suggestion that security testing could happen in ‘a controlled manner’ once the app was launched. Concerns about distributive impact There were also concerns about indirect impact, particularly on labour relations, access to justice, and freedom of the press. While there was considerable official pressure to download the app, according to labour law experts, a Norwegian employer could not require that employees download it. Employers could even (for information security reasons) prohibit downloading the app onto a mobile phone belonging to the employer.36 Nevertheless, the pressure to download the Smittestopp app was likely widespread amongst employers. Moreover, Norwegian newspaper editors and lawyers expressed concern about source protection and client confidentiality37—all issues in urgent need of further inquiry.