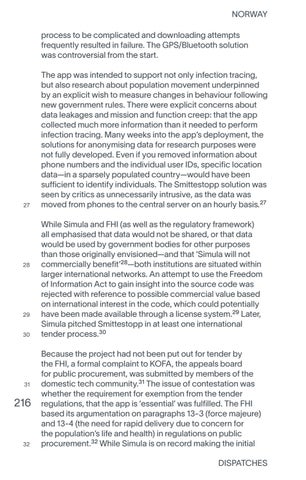 NORWAY process to be complicated and downloading attempts frequently resulted in failure. The GPS/Bluetooth solution was controversial from the start.

The app was intended to support not only infection tracing, but also research about population movement underpinned by an explicit wish to measure changes in behaviour following new government rules. There were explicit concerns about data leakages and mission and function creep: that the app collected much more information than it needed to perform infection tracing. Many weeks into the app’s deployment, the solutions for anonymising data for research purposes were not fully developed. Even if you removed information about phone numbers and the individual user IDs, specific location data—in a sparsely populated country—would have been sufficient to identify individuals. The Smittestopp solution was seen by critics as unnecessarily intrusive, as the data was moved from phones to the central server on an hourly basis.27 While Simula and FHI (as well as the regulatory framework) all emphasised that data would not be shared, or that data would be used by government bodies for other purposes than those originally envisioned—and that ‘Simula will not commercially benefit’28—both institutions are situated within larger international networks. An attempt to use the Freedom of Information Act to gain insight into the source code was rejected with reference to possible commercial value based on international interest in the code, which could potentially have been made available through a license system.29 Later, Simula pitched Smittestopp in at least one international tender process.30 Because the project had not been put out for tender by the FHI, a formal complaint to KOFA, the appeals board for public procurement, was submitted by members of the domestic tech community.31 The issue of contestation was whether the requirement for exemption from the tender regulations, that the app is ‘essential’ was fulfilled. The FHI based its argumentation on paragraphs 13-3 (force majeure) and 13-4 (the need for rapid delivery due to concern for the population’s life and health) in regulations on public procurement.32 While Simula is on record making the initial Dispatches