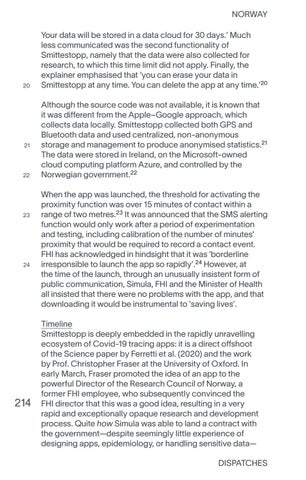 Your data will be stored in a data cloud for 30 days.’ Much less communicated was the second functionality of Smittestopp, namely that the data were also collected for research, to which this time limit did not apply. Finally, the explainer emphasised that ‘you can erase your data in Smittestopp at any time. You can delete the app at any time.’20 Although the source code was not available, it is known that it was different from the Apple–Google approach, which collects data locally. Smittestopp collected both GPS and Bluetooth data and used centralized, non-anonymous storage and management to produce anonymised statistics.21 The data were stored in Ireland, on the Microsoft-owned cloud computing platform Azure, and controlled by the Norwegian government.22 When the app was launched, the threshold for activating the proximity function was over 15 minutes of contact within a range of two metres.23 It was announced that the SMS alerting function would only work after a period of experimentation and testing, including calibration of the number of minutes’ proximity that would be required to record a contact event. FHI has acknowledged in hindsight that it was ‘borderline irresponsible to launch the app so rapidly’.24 However, at the time of the launch, through an unusually insistent form of public communication, Simula, FHI and the Minister of Health all insisted that there were no problems with the app, and that downloading it would be instrumental to ‘saving lives’. Timeline Smittestopp is deeply embedded in the rapidly unravelling ecosystem of Covid-19 tracing apps: it is a direct offshoot of the Science paper by Ferretti et al. (2020) and the work by Prof. Christopher Fraser at the University of Oxford. In early March, Fraser promoted the idea of an app to the powerful Director of the Research Council of Norway, a former FHI employee, who subsequently convinced the FHI director that this was a good idea, resulting in a very rapid and exceptionally opaque research and development process. Quite how Simula was able to land a contract with the government—despite seemingly little experience of designing apps, epidemiology, or handling sensitive data— Dispatches