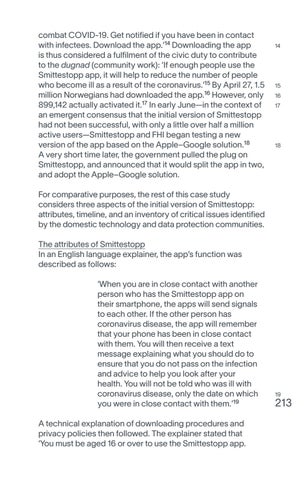 combat COVID-19. Get notified if you have been in contact with infectees. Download the app.’14 Downloading the app is thus considered a fulfilment of the civic duty to contribute to the dugnad (community work): ‘If enough people use the Smittestopp app, it will help to reduce the number of people who become ill as a result of the coronavirus.’15 By April 27, 1.5 million Norwegians had downloaded the app.16 However, only 899,142 actually activated it.17 In early June—in the context of an emergent consensus that the initial version of Smittestopp had not been successful, with only a little over half a million active users—Smittestopp and FHI began testing a new version of the app based on the Apple–Google solution.18 A very short time later, the government pulled the plug on Smittestopp, and announced that it would split the app in two, and adopt the Apple–Google solution.

For comparative purposes, the rest of this case study considers three aspects of the initial version of Smittestopp: attributes, timeline, and an inventory of critical issues identified by the domestic technology and data protection communities. The attributes of Smittestopp In an English language explainer, the app’s function was described as follows: ‘When you are in close contact with another person who has the Smittestopp app on their smartphone, the apps will send signals to each other. If the other person has coronavirus disease, the app will remember that your phone has been in close contact with them. You will then receive a text message explaining what you should do to ensure that you do not pass on the infection and advice to help you look after your health. You will not be told who was ill with coronavirus disease, only the date on which you were in close contact with them.’19 A technical explanation of downloading procedures and privacy policies then followed. The explainer stated that ‘You must be aged 16 or over to use the Smittestopp app.