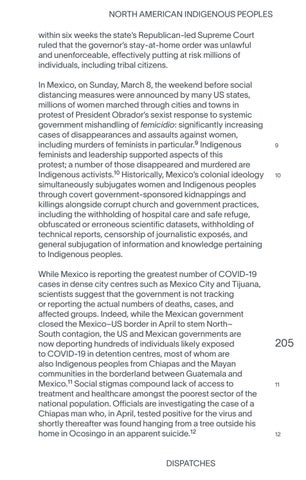 North American Indigenous PEOPLES within six weeks the state’s Republican-led Supreme Court ruled that the governor’s stay-at-home order was unlawful and unenforceable, effectively putting at risk millions of individuals, including tribal citizens. In Mexico, on Sunday, March 8, the weekend before social distancing measures were announced by many US states, millions of women marched through cities and towns in protest of President Obrador’s sexist response to systemic government mishandling of femicidio: significantly increasing cases of disappearances and assaults against women, including murders of feminists in particular.9 Indigenous feminists and leadership supported aspects of this protest; a number of those disappeared and murdered are Indigenous activists.10 Historically, Mexico’s colonial ideology simultaneously subjugates women and Indigenous peoples through covert government-sponsored kidnappings and killings alongside corrupt church and government practices, including the withholding of hospital care and safe refuge, obfuscated or erroneous scientific datasets, withholding of technical reports, censorship of journalistic exposés, and general subjugation of information and knowledge pertaining to Indigenous peoples. While Mexico is reporting the greatest number of COVID-19 cases in dense city centres such as Mexico City and Tijuana, scientists suggest that the government is not tracking or reporting the actual numbers of deaths, cases, and affected groups. Indeed, while the Mexican government closed the Mexico–US border in April to stem North– South contagion, the US and Mexican governments are now deporting hundreds of individuals likely exposed to COVID-19 in detention centres, most of whom are also Indigenous peoples from Chiapas and the Mayan communities in the borderland between Guatemala and Mexico.11 Social stigmas compound lack of access to treatment and healthcare amongst the poorest sector of the national population. Officials are investigating the case of a Chiapas man who, in April, tested positive for the virus and shortly thereafter was found hanging from a tree outside his home in Ocosingo in an apparent suicide.12 Dispatches