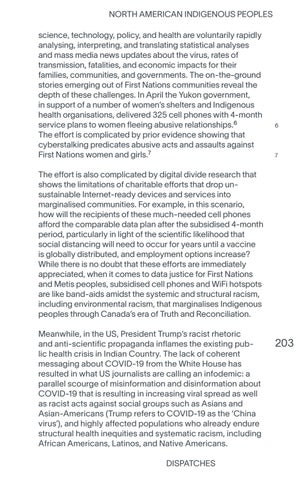 North American Indigenous PEOPLES science, technology, policy, and health are voluntarily rapidly analysing, interpreting, and translating statistical analyses and mass media news updates about the virus, rates of transmission, fatalities, and economic impacts for their families, communities, and governments. The on-the-ground stories emerging out of First Nations communities reveal the depth of these challenges. In April the Yukon government, in support of a number of women’s shelters and Indigenous health organisations, delivered 325 cell phones with 4-month service plans to women fleeing abusive relationships.6 The effort is complicated by prior evidence showing that cyberstalking predicates abusive acts and assaults against First Nations women and girls.7

The effort is also complicated by digital divide research that shows the limitations of charitable efforts that drop unsustainable Internet-ready devices and services into marginalised communities. For example, in this scenario, how will the recipients of these much-needed cell phones afford the comparable data plan after the subsidised 4-month period, particularly in light of the scientific likelihood that social distancing will need to occur for years until a vaccine is globally distributed, and employment options increase? While there is no doubt that these efforts are immediately appreciated, when it comes to data justice for First Nations and Metis peoples, subsidised cell phones and WiFi hotspots are like band-aids amidst the systemic and structural racism, including environmental racism, that marginalises Indigenous peoples through Canada’s era of Truth and Reconciliation. Meanwhile, in the US, President Trump’s racist rhetoric and anti-scientific propaganda inflames the existing public health crisis in Indian Country. The lack of coherent messaging about COVID-19 from the White House has resulted in what US journalists are calling an infodemic: a parallel scourge of misinformation and disinformation about COVID-19 that is resulting in increasing viral spread as well as racist acts against social groups such as Asians and Asian-Americans (Trump refers to COVID-19 as the ‘China virus’), and highly affected populations who already endure structural health inequities and systematic racism, including African Americans, Latinos, and Native Americans. Dispatches