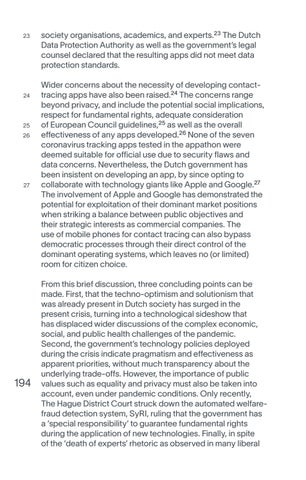 society organisations, academics, and experts.23 The Dutch Data Protection Authority as well as the government’s legal counsel declared that the resulting apps did not meet data protection standards. Wider concerns about the necessity of developing contacttracing apps have also been raised.24 The concerns range beyond privacy, and include the potential social implications, respect for fundamental rights, adequate consideration of European Council guidelines,25 as well as the overall effectiveness of any apps developed.26 None of the seven coronavirus tracking apps tested in the appathon were deemed suitable for official use due to security flaws and data concerns. Nevertheless, the Dutch government has been insistent on developing an app, by since opting to collaborate with technology giants like Apple and Google.27 The involvement of Apple and Google has demonstrated the potential for exploitation of their dominant market positions when striking a balance between public objectives and their strategic interests as commercial companies. The use of mobile phones for contact tracing can also bypass democratic processes through their direct control of the dominant operating systems, which leaves no (or limited) room for citizen choice. From this brief discussion, three concluding points can be made. First, that the techno-optimism and solutionism that was already present in Dutch society has surged in the present crisis, turning into a technological sideshow that has displaced wider discussions of the complex economic, social, and public health challenges of the pandemic. Second, the government’s technology policies deployed during the crisis indicate pragmatism and effectiveness as apparent priorities, without much transparency about the underlying trade-offs. However, the importance of public values such as equality and privacy must also be taken into account, even under pandemic conditions. Only recently, The Hague District Court struck down the automated welfarefraud detection system, SyRI, ruling that the government has a ‘special responsibility’ to guarantee fundamental rights during the application of new technologies. Finally, in spite of the ‘death of experts’ rhetoric as observed in many liberal